I am frequently asked by HTMs what I would recommend as a general strategy to follow when troubleshooting failures in ultrasound systems. Given how complex contemporary ultrasound systems can be it is a great question. With ultrasound systems, regardless of manufacturer, I usually start at the macro-level – specifically, all ultrasound systems are composed of similar system architecture blocks. The three primary functions within each system are (1) echo transmission, (2) echo acquisition, and (3) display processing. The first two functions comprise the “front-end” of the system, and the display processing takes place in the back-end of the system (scan conversion, etc.). A block-diagram level depiction of this is shown below. Another macro-level thought is that cart-based systems are software-centric, meaning there are a rather large number of potential failure modes that are hardware independent. In fact, there are generally more ultrasound product recalls in any given year that are software rather than hardware related.

Failure modes in ultrasound systems will occur in many varieties:  hard, soft, intermittent, software, and operator error.  Hard failures are catastrophic and are generally straightforward to 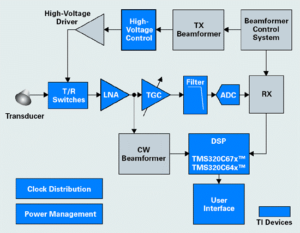 diagnose (see Photo above).  They can usually be traced to a certain board, Field Replaceable Unit (FRU), power supply, monitor, or transducer, for example.  It is key in the troubleshooting process to keep in mind that failures tend to cluster around the weakest points of the design – things that heat up (e.g., power supplies), switch fast (transmitters), or that are susceptible to physical damage (probes).  Symptoms demonstrated by a failure (e.g., smoke coming out of a power supply!) will often help direct troubleshooting efforts.  Be sure to round up the usual suspects:  something that people touch, components that normally run hot, software, and connectors.  If you have access to the error log on the system the data may point you in the general direction of the offending board or sub-system, (FRU); keep in mind though that error log results are not always accurate. The clinical operator can usually provide clear reports on soft failures, e.g., broken knobs, casters, etc., as well as issues with image or Doppler quality.  Intermittent problems, software anomalies, and failure reports stemming from operator error are always more difficult to diagnose and require higher levels of troubleshooting and investigation (such as: has this type of failure occurred on this system before, and what was the resolution to the problem?). It would also be helpful, in the day of the IoT, to have someone compile a national database on ultrasound system failures that HTMs could access and see what others have found in similar circumstances. We started doing this at Sonora with our Guru database with some real success. One last thing at the macro-level, make sure you read the operators manual and the service manual; both contain information that may help you tri-angulate a problem.

Finally, one point about general image quality complaints as they can occur because of system failures (dead transmitters), transducer failures (e.g., dead elements), or are naturally occurring phenomenon such as shown and described below. Image artifacts may occur within the transducer field of view displayed on the monitor and do not represent actual anatomical structures (see example diagram and clinical image below).  They are often reported as system or transducer failures.  However, image artifacts may also be caused by system limitations or operation, as well as the laws of physics.  Artifact types include reverberation, attenuation, transducer, refraction, spectral, and color.  They are often caused by too much power, too much power at a certain depth, muscle movement during imaging, acoustic shadowing such as the area behind a gall stone, large boundary mismatches, and noise interference from outside electromagnetic sources. 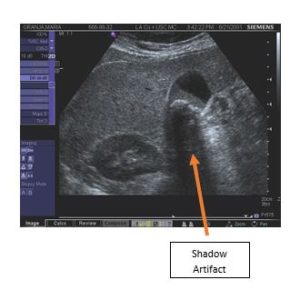 If you have any questions, or would like to have a more comprehensive tutorial on this subject please email me at gwmoore@acertaralabs.com

Until next month! Cheers, Wayne