When I was in undergraduate school earning my engineering degree, I paid for the tuition in two ways. 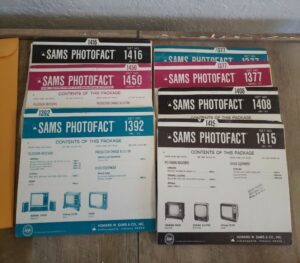 First source was the money from the VA for my time in the Marine Corps, and secondly by repairing TVs at night and on the weekends at a company called Aladdin TV repair. The shop, shown in the picture below was filled to the brim with vacuum tubes, resistors, capacitors, inductors, flyback transformers, power supplies and of course various picture brands of picture tubes. We used oscilloscopes, multimeters, waveform generators and the trusty degaussing coils. But key to fixing any TV model of that era was having access to the SAMS manuals which contained schematics, parts lists, updates, and the occasional troubleshooting tip. Without a SAMS manual you were pretty much dead in the water with regard to troubleshooting the circuits. There were hundreds of components soldered in the through-hole printed circuit boards and a maze of interconnect wires. There were also voltages present in those old TVs that could curl your toes if you weren’t careful.

We were always busy because these analog devices and vacuum tubes were always breaking down. We also had a tube tester in the lobby of the shop so folks could come in and test the tubes in their TV, and, if defective, they could buy a replacement tube from us right there. In today’s TV there are about four components some of which are not off the shelf (e.g., ASICs) parts. Today’s TV is also several orders of magnitude more reliable than yester-years vacuum tube sets. In the 1980s and forward ultrasound systems, like the Acuson 128, had a ton of boards and all kinds of finished components. Today the medical imaging devices have about as many boards and components as a flat screen TV. SAMS manuals have changed to reflect that paradigm shift away from component level repair to field replaceable unit repairs. No more totting around a 75-pound Tektronix 465 oscilloscope and soldering irons. Today the most common failure in an ultrasound system is a software related issue and the most important tool for the OEM serviceman is the cell phone.

So why am I bringing this up? One hot issue in the medical device arena right now is the push to force OEMs, via legislation, to provide service manuals, etc…, to anyone who asks for it. But have you seen an OEM service manual for a high-end ultrasound system lately? Clearly not designed to repair to a component level, because most of the components are gone. The irony in this push to force service manuals from the OEM is that by the time legislation is passed to do so, there will be no more service manuals. Just as the TV repair paradigm has shifted since I was a young man, so goes modern medical imaging devices.