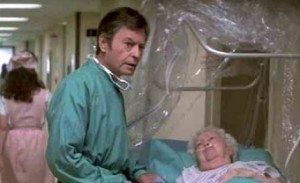 Ok, time to come clean; I am a Trekkie. There, I said it and I can get on with this month’s article – the convergence of rapidly evolving technology toward a real- life Tricorder; and it’s about time. In the 1986 movie Star Trek IV “The Voyage Home” there is a scene where Dr. McCoy, aka “Bones”, had the following exchange with an elderly woman lying on a gurney in a hospital hallway:

MCCOY: What’s the matter with you?

MCCOY: Dialysis? My god, what is this, the Dark Ages?

Imagine this, the first antibiotic, penicillin, was invented/discovered in 1928 by biochemist Alexander Fleming, less than a hundred years ago, and was not widely used in hospitals until the mid-1940’s. In 2019 it seems we have a pharmaceutical for virtually every imaginable disease. The X-ray machine was invented/discovered in 1895 by Wilhelm Conrad Roentgen, but wasn’t considered essential for clinical care until the early 1900’s. Although the first clinical MRI scan was done in 1977 it wasn’t until the early to mid-1980s before the devices were first commercially available. Since the mid-1980s new imaging devices introduced to the market have proliferated; devices such as 24-ring geometry Positron Emission Tomography, 256-slice CT scanners, 7.0 Tesla functional MRI scanners, ultrasound probes with more than 10,000 elements, etc. Most of the systems described above had one thing in common; they were costly and huge. These imaging devices have almost eliminated the need for “exploratory surgery”. Image Dr. McCoy going into a 1980s hospital where they were doing exploratory surgery on a patient when a simple ultrasound image would have shown a tumor in the liver!

With Moore’s law operating at full-throttle the medical device industry since the early 2000’s has focused tremendous resources on reducing the size, cost, and core functionality of new imaging devices. Additionally, traditional distinctions between diagnosis and treatment are being reimagined – for example certain therapeutic applications of ultrasound such as using low-intensity 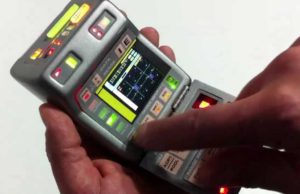 focused ultrasound pulsation to open a window into the blood-brain barrier. Putting dual capabilities into a single device such as High-intensity focused ultrasound (HIFU) for treatment and diagnostic ultrasound as a guidance tool for delivering the HIFU energy to a specific location within an organ. In 2018 an ultrasound start-up company, Butterfly, put on the market a smart probe coupled to the owner’s smart device to push diagnosis closer to the point of care. Using cMUT technology the Butterfly device drove out both the high cost and the size of an ultrasound unit. Adding other biosensors to detect, monitor, and analyze other clinical parameters such a device could potentially become the vaunted Tricorder of Star Trek renown. One can imagine now what was only science fiction fodder 50 years ago – the ability to diagnose and treat disease/traumatic injury where the patient is, and all non-invasively. Couple these remarkable advances with the potential power of artificial intelligence (AI) and as they say – the sky will be the limit. We are getting closer and the next decade should see remarkable changes in healthcare delivery and the rise of non-invasive medicine. Maybe we will reach the point where Dr. McCoy would no longer say “My god, what is this, the Dark Ages?” Buckle up.