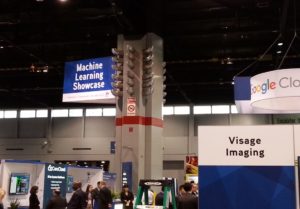 The hot-button issue at RSNA was artificial intelligence (AI); AI/Machine learning. In fact, Google was at the RSNA for the first time in an area of the Hall called the “Machine Learning (ML)Showcase (MLS).” The Google booth was the hub of a number of spoken start-ups and other AI companies that use the Google infrastructure to build their respective product/service offering. From the free and often extravagant use of hyperbole at each booth location within the MLS, it is apparent that this nascent market will be relatively slow in developing into a well-defined, outcomes- based business. Not, in a manner of speaking, dissimilar to the time when PACS systems proliferated the convention floor back in the 1990’s and early 2000’s. Look around today and almost all those PACS companies are gone. 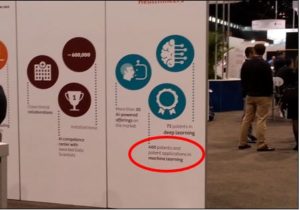 In my observation, the key missing ingredient in all of the discussions concerning the practical implementation of AI/ML is: where does the clinical data that will be needed to drive adoption of this technology currently reside? Thinking about ultrasound specifically, it is relatively straightforward, technologically, to capture an ultrasound image and send it to the “cloud”, but once it is there – against what is the image compared?  I spoke with a few ultrasound luminaries while at RSNA and they said the same thing over-and-over – until a vast majority of clinical images, regardless of modality, are aggregated into a single accessible database the potential of AI overreads and primary diagnosis will remain elusive. Imaging modality subject matter physicians who have accumulated substantial clinical imaging databases over the years are reluctant to simply hand over their data without some form of compensation. And there is so much more involved than just an image; e.g., digital pathology, clinical genomics, and pharmaco genomics, that will be the ultimate enabler of AI/ML implementation. It will happen, but it will be an iterative over the next decade. This area may also be the next major battleground of healthcare related intellectual property. One booth in the MLS that demonstrated my point here is shown in the image to the right with the bullet-point: “400 patents and patent applications in machine learning.”  The stakes in the AI/ML market will ultimately be higher than any other technology in the healthcare space; and a significant number of large corporations are going all in. 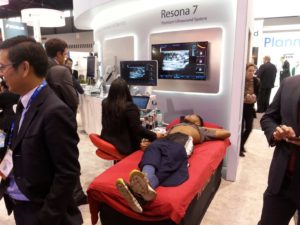 Ultrasound, as usual, was everywhere at RSNA, ranging in scale and price from a couple of grand to a couple hundred grand, from wireless handheld devices to feature heavy cart-based systems. From clinically applications-specific devices to complete general imaging systems with a host of new imaging and Doppler modes. From the transducer development perspective Hitachi introduced a cMUT transducer; the first major OEM to offer a commercial cMUT probe. Although not attending RSNA, Butterfly Network was the first to offer a commercially available cMUT ultrasound only device (ACEP 2017). The Hitachi cMUT probe is a 1.5D array with a frequency range of 2 to 22MHz, and a continuously focusing scheme called eFocusing. There were a number of wireless handheld units in various booths that were not particularly interesting from a performance or even use perspective. The best-of-class of wireless handheld at the RSNA was far-and-away the Clarius handheld wireless device. Excellent B-mode images and color Doppler performance, good probe selection, as well as ease of use.

There was also a section in one of the Halls that I dubbed “snake-oil” row. I am amazed that RSNA allows this at their Scientific sessions. It seems to me a bit over the top to have these kinds of products on display and for sale on the Exhibit floor. Rejuvenating crème – makes the wrinkles instantly disappear. Stay “forever young” with Perfecto by Zero Gravity, using the NASA logo; tell me have you ever seen an Astronaut after they have returned from a long stint in the International Space Station? They look like 100 miles of bad road, not the fountain of youth. Hopefully RSNA will catch on that including these products in the Exhibit Halls does their professional Brand no good.