Greetings! I am Peter Leonhardt, the Probe Lab Manager at Acertara, and today I will shed light on some common fly fishing casting technique mistakes. With extensive experience in guiding in both professional big game hunting and fly-fishing, today, I hope to share some advice with you on common fly fishing casting mistakes. These recommendations are a result of observations I have made while teaching those new to the sport learn to cast. Let us get right to it: 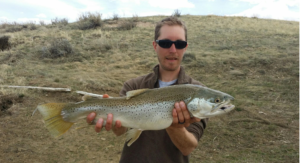 First, people tend to cast too quickly. They whip the rod back-and-forth in a continuous rapid motion and never really give the rod a chance to load correctly. This creates a dead cast. A dead cast is enormously frustrating and happens when you can no longer manage the line with the rod resulting in the line raining down all around you with no specific direction. Proper rod loading prevents dead casts.  Load? You might say? Yes, your rod is a giant spring and it requires a force to store and transfer energy. The flow of a proper cast (keeping the airborne line tight) and the mass of your line is all you need to cast. Don’t fret though because line-loading is quite easy to achieve and frankly, requires no real act of magic at all but rather a bit a patience.

To kick this off, please understand that there are only two things to consider here: how we load this giant spring with the line’s inertia (there is more physics involved which I’ll skip) and then how we throw it. Casting too quickly prevents the line from acting as a load to the rod. This is simple to correct with a pause between the back-cast and forward-cast. For small casts, try two seconds and increase it as the line going out gets longer. The added pause will allow the line to reach full extension behind the fisherman and initiate the loading process. The longer the cast, the longer the pause needs to be to allow for enough time for the line to travel where it can be loaded. A good forward cast is executed when most of the fly-line is behind the fisherman and can resist all motions the fisherman applies to the forward cast by use of the rod. If correctly done, your rod will flex on the forward cast as it tries to change the direction of the line behind you from travelling backwards to forward. The now bent rod has stored all the energy it needs to throw the line forward and is simply waiting for the line behind the caster to change direction and for you to fire it where you want it to go.

Onlookers, marvel at fly fisherman and fly fisherwomen because they are captivated by the elegant and majestic dance their line does while in flight and are often quite complexed as how they manage such an affair- it looks intimidating for sure. However, those majestic loops created by the fisherman do not only look cool but are required to make the mechanics of a cast work. The loops are formed by the line changing direction and following the trajectory set forth by a loaded rod. These loops, at this point, are now no different from a baseball or football in a sense and simply need to be thrown.

We have all thrown something before and finishing off the cast is quite analogous to throwing a ball. To maximize a projectiles’ distance when throwing, we must snap the wrist as the arm rolls into the ideal launch position of near forty-five degrees. I will revisit launch angles here in a minute, but first let us complete this throwing idea. So, we have paused on our back-cast and we have successfully swung the rod to a forward position while loading the rod and now it is time to throw the line. It is critical that the line be released no different then you would when throwing a ball. I repeat you must have 100% control of letting the line out and stopping it during a forward cast, all within this small micro-second window during the cast. If you let line out before your rod is at forty-five degrees to Earth or before you have directed the airborne line behind you to move forward, it will be a dead cast. Humanity has not accepted wearing flies on the back of your head as a social norm, so I encourage you to mind this when deciding when to let the line go. Think about it for a second. If you let line out to early, then the rod will unload by pulling line from the reel-end of the rod as it is the path of least resistance and the rod will cease on pulling the line behind you (in the cast) forward. The sweet spot is letting line out when all the line behind you is propelled forward and the rod has done all the work it can in propelling the line forward. At this time, the whole mass of your line will be tugging on you and you should be feeding it line like ascending a kite. If you are false casting or in the middle of a three to five cast series, then you must only let out a few feet of line at a time. Not stopping the line in the forward cast will prevent you from loading the rod on the next back cast, same principal but opposite direction.

Ultimately, if you want to cast into the wind, you will have to learn the double haul method which multiples the rod loading affect and really allows you to launch your line in a very streamlined way. This topic may be best learned from YouTube videos or a buddy, but I will not discuss it in this read.

By now your coffee cup must be dangerously low on fuel and your Outlook notifications have reminded you that you are not out fishing, so I will leave you with one last casting tip: People tend to point the rod in the wrong direction while casting. On the back cast they would allow their rod to almost hit the ground and same deal on the forward cast. The line goes where the rod points to and never is the case you want to cast into the ground. Let us use a driving cliché to tackle this one: ten and two, bingo- you get where I am going with this. Recall earlier that the ideal launch angle to cast is forty-five degrees to Earth. When you go to cast your rod, you should stop and hold it at forty-five degrees to Earth on both the forward and back cast. The arm and wrist roll and snap to transition the cast between these two locations and these movements should be intentional and forceful. This is how you create good looking, functional loops to form in the casted line that optimize rod loading. Give it a go.

I hope you found these tips useful and perhaps next weekend you can try them firsthand. To summarize: