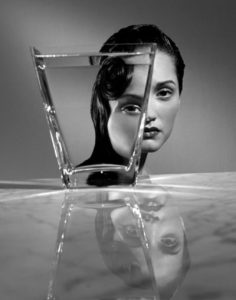 In spite of all the amazing new image processing algorithms and mind-numbingly fast electronics there still remains a significant challenge in clearing up one form of spatial image distortion that persists in current ultrasound images – specifically, the correct positions of the imaged objects are not corrected or maintained. Current spatial compounding techniques work to make point-like targets look point-like. In essence they operate to de-blur the image to some degree. They do not, however, correct for any errors in the positions of those points within the image field.

Diagnostic ultrasound imaging in the body is akin to looking through a shower glass. The image of the person on the other side is both blurred and distorted. The blurring is caused by fairly rapid variations in the glass thickness whereas the distortion comes from relatively slow variations. Current aberration correction techniques tend to remove the effects of the rapid variations, not the slow ones. What results is a fairly well resolved but distorted image much the same as is shown in the photo above, and what one sees through curves and bends in an automobile windshield.

Spatial distortions like the one shown above do not present themselves when one is imaging with a tissue mimicking phantom, as the material used is homogeneous from the top of the phantom to the bottom. Yet when imaging in the human body the “windshield” distortion can sometimes be great enough to cause multiple erroneous features. For example, sonographers and clinicians generally no longer image the womb with the transducer placed along the mother’s midline. The distortion caused by the abdominal muscles in this region are known to give rise to a false impression of twins. Current aberration correction methods do not change this effect and can, potentially, make it worse. 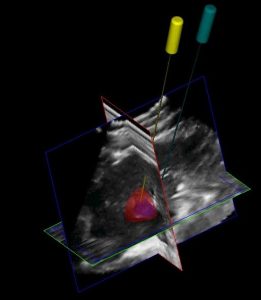 area of image guided intervention, see 3D image below. Exact placement during these procedures is obviously paramount in the successful outcome of the procedure; so, any distortion that could lead to misplacement could potentially be a significant risk to the patient. Additionally, other uses of ultrasound volumetric images are being researched on a daily basis; for example, contrast media imaging combined with chemo-therapeutic treatment, imaging with bio-markers, pre-surgical planning, and 3D printing of the organs, and so on.

Although we have come a long way with both transducer and system technology over the last twenty years we still have some significant design challenges left to create an ultrasound image on par with the resolution of MR and CT scans – but we’ll get there.